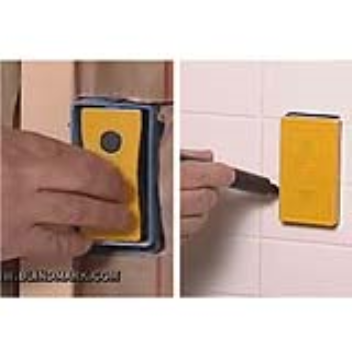 Tool that promises to eliminate the need foraccurate measurements when making cutouts in drywall or panelling forelectrical outlets and wall switches. The device comes in two pieces.The first piece is called the target, and is placed into the outlet orswitch box. The second piece, called the target locator is attracted tothe first piece thanks to two strong magnets that ensure perfectalignment and accuracy. Once the locator affixes itself to the target,the installer simply outlines the box and makes the cut with a dremel.