Function: make it easier to learn × 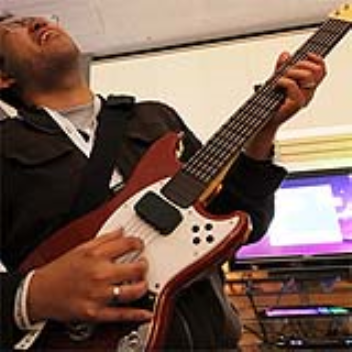 For years, musicians have mocked those of us holding plastic guitars. Fair enough but we had fun! But with Rock Band 3, we learn what Harmonix was up to all along: Actually teaching us how to play real instruments.

With complex game design coupled with increasingly detailed peripherals, Harmonix has reimagined not only the nature of the music game genre but where video games can take us into the future.

It was a clever ruse. Hand us five buttons and a strum bar in the vague shape of a guitar. Sync the presses to an audio track and suddenly every awkwardly proportioned teenager thinks he's Bon Jovi. (After Harmonix reminded him who Bon Jovi was.)

The rhythm game genre is a multi-billion-dollar industry unto itself now. $80 is a small price to pay to feel like we are part of a band, to feel a little ersatz cool and talent to boot. The air guitar had been digitized.

Most games franchises stop here. Offer the player a challenging but surmountable task. Find a way to reward them to repeat said task. Scratch our collective OCD right behind the ears just enough to never quite satisfy us but stop us from walking away.

Most video games are extremely effective at coaxing us to work, but this work never produces anything much of merit. You may unlock things, virtual things, like a level 70 character in WoW with an epic flying mount. But when you walk away from the computer or console, you walk away as the same person, not as a spell-wielding Death Knight or something.