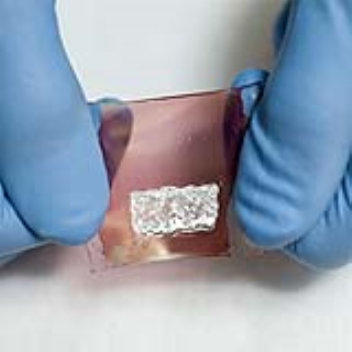 Stanford University chemical engineering Professor Zhenan Bao has developed a flexible, stretchable solar cell, which she envisions as a future component in artificial skin for robots, human prosthetic limbs, or even clothing.

The film stretches up to 30% from its original size along two axes without losing function or resulting in loss of elasticity. That kind of durability allows for innovative applications; Bao speculates that her film could be incorporated into soldiers' uniforms as a bio-sensor, or into prosthetic limbs and digits that perceive touch and have better flexibility than current options.

The sensory-detection system built into the skin is so sensitive it can detect the presence of a housefly. With customized nanolayers, the film can also be used as a sensor for various chemical and biological compounds. One test performed already shows that a modified Super-Skin film can detect a certain kind of DNA.