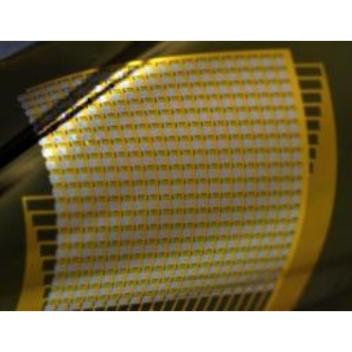 Researchers funded by the National Institutes of Health have developed a flexible brain implant that could one day be used to treat epileptic seizures. In animal studies, the researchers used the device – a type of electrode array that conforms to the brain's surface – to take an unprecedented look at the brain activity underlying seizures.

"Someday, these flexible arrays could be used to pinpoint where seizures start in the brain and perhaps to shut them down," said Brian Litt, M.D., the principal investigator and an associate professor of neurology at the University of Pennsylvania School of Medicine in Philadelphia. The findings appear in this month's Nature Neuroscience. The team will also discuss their findings at the 2011 Society for Neuroscience meeting, Nov. 12-16 in Washington, D.C.

The array developed by Dr. Viventi and his colleagues is made of a pliable material that is only about one quarter the thickness of a human hair. It contains 720 silicon nanomembrane transistors in a multiplexed 360-channel array, which allow for minimal wiring and dense packing of the electrodes. "This technology allows us to see patterns of activity before and during a seizure at a very fine scale, with broad coverage of the brain," said Jonathan Viventi, Ph.D., the study's lead author and an assistant professor at the Polytechnic Institute of New York University and New York University.

The flexibility of the array allows it to conform to the brain's complex shape, even reaching into grooves that are inaccessible to conventional arrays. With further engineering, the array could be rolled into a tube and delivered into the brain through a small hole rather than by opening the skull, the researchers said.