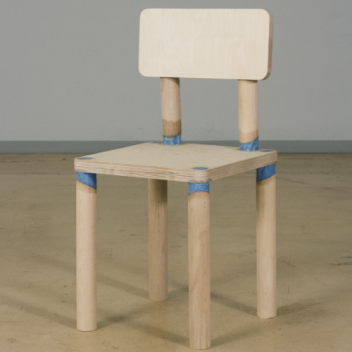 The question of acceptable DRM (Digital Rights Management) to combat piracy has been a hot-button issue with software consumers for years. But what if the concept of disabling a product after certain conditions are met wasn't just restricted to digital goods? That's the idea that a design team in Switzerland decided to explore with the "DRM Chair," a piece of furniture rigged to fall apart after being sat on eight times.

After an initial attempt involving charges made of gunpowder proved to be ineffective (and dangerous), the team settled on a design with each piece of the wooden chair held together using wax joints fitted with nichrome wire.

An Arduino-based mechanism attached to a contact switch keeps track of how many times someone sits on it and knocks on the wood each time they get up, indicating the number of uses left. After eight people have sat on it, the mechanism triggers a self-destruct system, which heats the wire until each joint melts and breaks away.