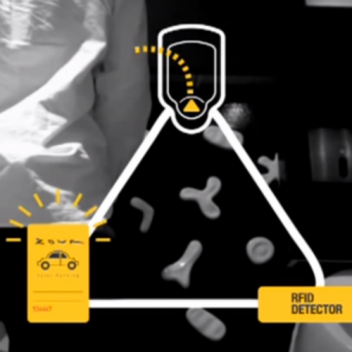 Alcohol and driving definitely don’t mix, but those most in need of having their keys taken away are the worst judges of how much they've had to drink. As part of an anti-drink/drive campaign by Singapore’s Zouk nightclub, DDB Group Singapore developed the Pee Analyzer: a system fitted to urinals that tests patrons’ alcohol levels every time they take a trip to the bathroom.

The Analyzer is a series of bespoke urine testing devices that can reset instantly for consecutive readings from multiple patrons. These devices are paired with an RFID reader and when patrons park their car, they exchange their car keys for parking cards containing RFID tags. These tags can then be used to identify the patrons and record their alcohol levels.

If a patron is above the legal limit while contemplating the wall, the system notes the RFID tag and, in keeping with a nightclub atmosphere, a bright message is flashed above the urinal suggesting that the patron take advantage of the club’s drive home program or call a cab. Another RFID reader at the valet station flashes similar warnings when the patron presents their parking cards so the valets can make the same suggestion for a ride or cab.