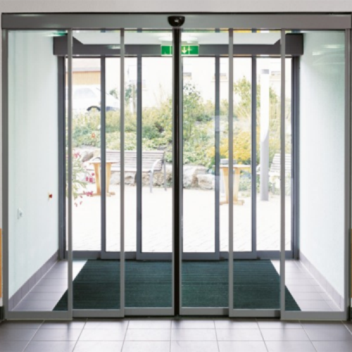 Smarter Automatic Doors Let You Run Through Them

The automatic sliding doors that we're familiar with from Star Trek are way smarter than the automatic sliding doors that we're familiar with from real life. In Star Trek, doors seem to know when characters want to go through them, and they never open by accident when someone is just walking by. Also, they manage to never be in the way when a character is running towards them at full speed (you try this at the mall and see what happens). Is it really too much to expect for automatic doors to have this sort of intelligence? It's not like we're asking for a Transporter. Now robotics researchers have (finally) made it happen.

There are two major improvements taking place here. First, the door is opened only for people who intend to use it. And second, the speed, width, and timing of the door opening is determined based on observations of the positions, speed, and number of people who are walking. The door estimates when you'll arrive at it, and times its opening such that it will have just finished opening itself as you get there. If you're in a hurry, the door cranks up its opening speed to make sure it gets out of your way in time. It also opens wider to admit more people at once when it has to. The door won't be able to tell whether to keep itself closed if you pause directly before it for dramatic effect, but otherwise, it's about as smart as a Star Trek door is.

The secret to this intelligence is no secret: the door has a fancy custom sensor (a 3D time-of-flight laser scanner) coupled with algorithms that can detect people, track their motion, and make educated guesses about whether or not they're aiming for the door. Somewhat unusually for a research paper like this, there is some serious consideration of practicalities, too. The sensor is designed to function in places with ambient light ranging from direct sunlight to total darkness (between 0 and 200,000 lx), and software can compensate for snow, rain, water on the sensor itself, and interference from other nearby sensors.

This fancier sensor comes at an additional cost than a conventional automatic door sensor. The researchers say that the custom sensor that they developed might add about $1,000 to the cost of a door, which sounds like a lot. However, the cost of hardware like this is something that tends to reduce itself dramatically year over year, so we'd like to think that we'd be able to experience smart doors like this without having to live long enough to see the maiden voyage of the USS Enterprise.