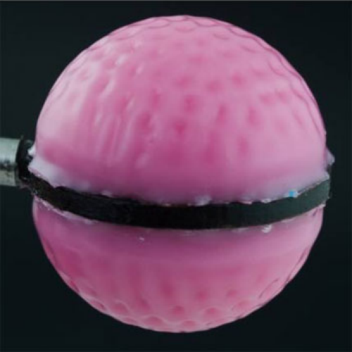 Researchers at MIT have developed a smart curved surface that can morph at will to reduce drag, generating a series of small, evenly spaced dimples that make it resemble the outside of a golf ball. This technology could be used to reduce hurricane damage on some public buildings, as well as increase the aerodynamic and fuel efficiency in cars.

Scientists and golfers alike have long known that the dimples on the surface of a golf ball allow it to drastically reduce drag and travel much farther than would otherwise be possible. This happens because the small dents hold the airflow near the surface of ball for a longer time, and this reduces the size of the wake, or zone of turbulence, as the ball takes off.

In reality, though, things are a bit more complicated than that. In recent years, in-depth aerodynamic studies have shown that the dimples reduce drag only at lower speeds. As you move toward faster speeds, the advantage of irregularities disappears and a smooth surface becomes the best way to minimize the wake. That's the reason why the Brazuca ball in use in this World Cup has dimples on its surface, but F1 cars don't.

Now, researchers at MIT have married the best of both worlds by developing "smorphs," smart morphing surfaces that can tune their smoothness on the fly to maximize aerodynamic efficiency at all speeds.

These new surfaces can change their configuration in real time because they're made using a multilayer material with a stiff skin and a soft interior. When air is extracted from the interior of a small spherical object made out of this material, the surface shrinks slightly and its surface wrinkles, creating dimples at regular intervals that resemble, and have the same aerodynamic benefits as, golf balls.

The configuration of the material is controlled by adjusting the pressure inside the ball, and this means that the researchers can not only turn the dimples on and off, but also tune their size precisely to minimize drag for all speeds.

"Smorphs" could be especially useful in building structures that won't collapse or incur significant damage when facing very high winds. One example could be the so-called radomes, the spherical, weatherproof domes that enclose radar antennas. The researchers say that the materials could also be used to minimize drag in cars in order to maximize fuel efficiency.