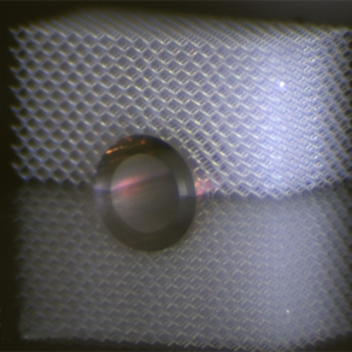 Invisibility Material Is Like A Cloaking Device For Touch

Wouldn’t it be nice if we could have lighter and thinner mattresses that prevent us from feeling anything underneath them? That is now a possibility, thanks to research at the Karlsruhe Institute of Technology, where scientists have created a new material that can prevent objects from being felt through touch.

There's been a lot of research on invisibility over the past several years, from cloaks that keep us from being seen to devices that keep us from being heard. But until now, no one has created something that prevents an object from being felt when touched. The KIT researchers started with a crystalline metamaterial made up of tiny cones that meet at the tips, a space that was carefully measured: these measurements must be accurate on a sub-micrometer level for the non-touching surface to work.

The team placed a hard cylinder within this material. This hard cylinder would easily be felt under foam, cotton, or other soft material. However, with the metamaterial, you can’t feel the hard cylinder at all — it’s like it’s not even there. In other words, the princess in the fairy tale would never feel the pea and get a good night’s sleep, even with just one mattress. You could achieve the same sort of touch-cloaking with a rigid material too, but it's the getting it to work with a soft, deformable material that's the tricky part.