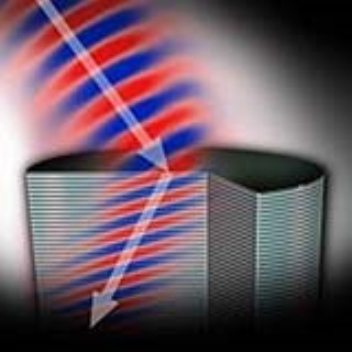 A Princeton-led research team has created an easy-to-produce material from the stuff of computer chips that has the rare ability to bend light in the opposite direction from all naturally occurring materials. This startling property may contribute to significant advances in many areas, including high-speed communications, medical diagnostics and detection of terrorist threats.

The new substance is in a relatively new class of materials called "metamaterials," which are made out of traditional substances, such as metals or semiconductors, arranged in very small alternating patterns that modify their collective properties. This approach enables metamaterials to manipulate light in ways that cannot be accomplished by normal materials.

In the case of the straw in a glass, normal water would make the underwater portion of the straw appear to bend toward the surface. If water were able to refract light negatively, as the newly invented semiconductor does, the segment of straw under the water would appear as if it were bending away from the surface.