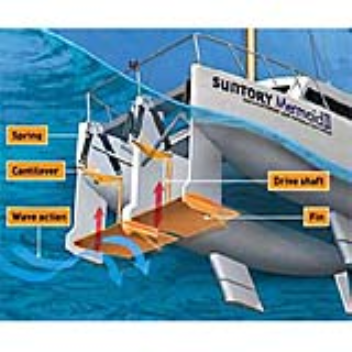 This month, 69-year-old Japanese sailor Ken-ichi Horie will attempt tocaptain the world's most advanced wave-powered boat 4,350 miles fromHawaii to Japan. If all goes as planned, he'll set the first Guinnessworld record for the longest distance traveled by a wave-powered boatand, along the way, show off the greenest nautical propulsion systemsince the sail.

At the heart of the record-setting bid is the Suntory Mermaid II,a three-ton catamaran made of recycled aluminum alloy that turns waveenergy into thrust. Two fins mounted side by side beneath the bow moveup and down with the incoming waves and generate dolphin-like kicksthat propel the boat forward. "Waves are a negative factor for aship: they slow it down," says Yutaka Terao, an engineering professor atTokai University in Japan who designed the boat's propulsion system. "But the Suntory can transform wave energy into propulsive power regardless of where the wave comes from."