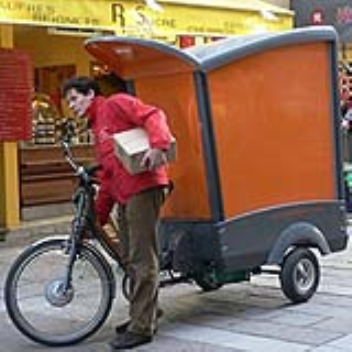 It's a fact of life in the business world that companies in urban areas tend to require frequent, small deliveries of merchandise and other goods from the city outskirts and beyond. That's a recipe for inefficiency, traffic congestion and pollution, as so many delivery trucks make their way in and out of town with partial loads again and again. French La Petite Reine has come up with an alternative, greener approach to business deliveries by using truck-sized cargo bikes instead.

La Petite Reine maintains a fleet of about 60 Cargocycles for hire by businesses that need to make small to medium-sized urban deliveries over a distance of up to 30 km. Weighing only 80 kg (as opposed to a tonne or more for most delivery vans), each Cargocycle can transport about 180 kg of merchandise in its 1,400-liter cargo space. (For larger loads, La Petite Reine also has electric trucks suitable for deliveries that size.) Cargocycles' small footprint lets them travel anywhere on the roadways, including bus and bike lanes, and they can park easily between two cars. Cargocycle deliveries are faster than those made via traditional truck, and also 10 to 20 percent less expensive, La Petite Reine says. Perhaps most significant, however, is that they are completely nonpollutingâin terms of both emissions and noise. Cargocycles are also available for lease or sale, as well as for advertising space and use at special events.