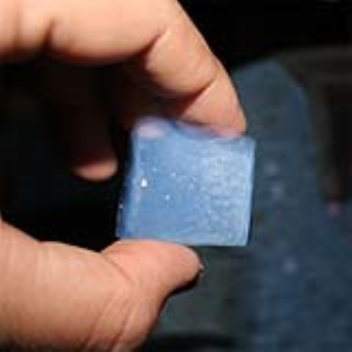 AirGlass, a type of glass that is 97% air. This is actually a sort of aerogel and weighs a mere 50Kg/m³. It would be used as a form of transparent wall and has amazing insulating potential.

The stuff is still too brittle to work with alone - the investor was looking into creating a thin plastic cover to protect it - but the glass could replace standard glass as it's transparent and can hold a colored dye.

At around 750°C (1380°F), it starts to shrink and slowly collapses to a piece of ordinary quartz.
Airglass can be cut with a band saw and holes can be drilled with a metal drill. It should be noted that Airglass is non-flammable and non-toxic.

Apparently before you mold it the glass can flow like water so you could make it into any shape.