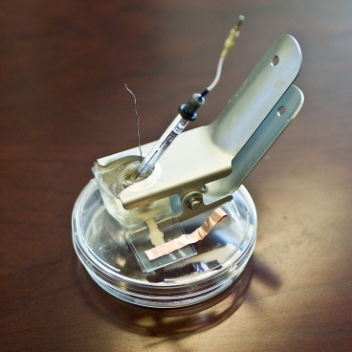 That process has now been imitated by Michael Strano, the Charles and Hilda Roddey Associate Professor of Chemical Engineering, and his team of graduate students and researchers. They have created a novel set of self-assembling molecules that can turn sunlight into electricity; the molecules can be repeatedly broken down and then reassembled quickly, just by adding or removing an additional solution.

The system Strano's team produced is made up of seven different compounds, including the carbon nanotubes, the phospholipids, and the proteins that make up the reaction centers, which under the right conditions spontaneously assemble themselves into a light-harvesting structure that produces an electric current. Strano says he believes this sets a record for the complexity of a self-assembling system. When a surfactant, similar in principle to the chemicals that BP has sprayed into the Gulf of Mexico to break apart oil, is added to the mix, the seven components all come apart and form a soupy solution. Then, when the researchers removed the surfactant by pushing the solution through a membrane, the compounds spontaneously assembled once again into a perfectly formed, rejuvenated photocell.