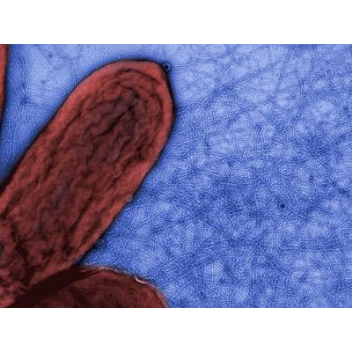 Researchers in the US say that they have discovered a new phenomenon in biology: metal-like conductivity along protein filaments. The result suggests that it could be possible to produce inexpensive conductive materials using micro-organisms - something that could "revolutionize" nanotechnology and bioelectronics, according to the team.

Derek Lovley and colleagues of the University of Massachusetts at Amherst made their discovery in networks of "bacterial filaments". These are also known as "microbial nanowires" because they conduct electrons along their length. These are produced naturally by some bacteria and are about 3-5 nm wide and up to tens of micrometres long. The filaments bind bacteria together into clumps called microbial biofilms.

Lovley's team looked at nanowires produced by the bacterium Geobacter sulfurreducens. The researchers measured electrical conductivities in the wires of around 5 mS cm^-1 , which is comparable to those of synthetic organic metallic nanostructures that are commonly used in the electronics industry. The wires were also seen to conduct over distances of centimetres, which is thousands of times the length of a bacterium itself.

The researchers claim that this is the first time that metallic-like conductivity has been found in a biological material. Indeed, microbial biofilms are generally thought of as being electronic insulators.