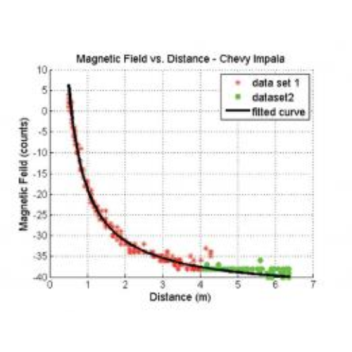 S. Taghvaeeyan and R. Rajamani of the University of Minnesota have published their study on using vehicles’ magnetic signatures for position estimation in a recent issue of Applied Physics Letters.

“The main sources of magnetic fields are the magnetized steel belts in the tires, the ignition, the alternator, air conditioning system, speakers, etc.,” Rajamani told PhysOrg.com. “The significant metal in the engine block, transmission, driveline, etc., can also be magnetized.”

By further improving these sensors and tailoring them for commercial use, the researchers envision that the sensors could be applied all around a vehicle’s body, where they could detect nearby vehicles in all directions.

“The sensors will be useful for detecting an imminent collision,” Rajamani said. “The sensors will provide information on the relative velocity and position of the impending crash on the vehicle. This could be used to pre-tighten seat belts, inflate airbags and deploy other active structural enhancement measures that can protect the occupants in the car during the crash.”