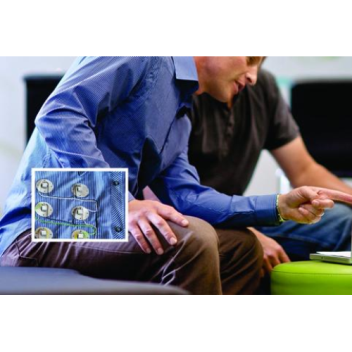 Belgian researchers have created a shirt with an integrated device that converts body heat into electricity.

The engineers at electronics company Imec claim that the completely hidden thermoelectric generator (TEG) can harness the body’s heat to generate electricity that could power low-energy wearable electronics.

The TEG comprises 16 ‘thermopiles’, which are the individual electronic components responsible for converting heat into electricity. The voltage they generate is directly proportional to the temperature gradient across them.

These thermopiles are sandwiched between two plates, one hot and one cold, giving the device an overall thickness of 5mm.

Ruud Vullers, principal scientist at Imec, told The Engineer: ‘If you have two semi-conductors and you apply a thermal gradient across them then a current will flow.’

The device is reported to produce an average power of 1mW when sitting in an office at 22ºC. As a result it could power health-monitoring devices such as electrocardiograms, which only require about 0.4mW.

The power output doubles when the user stands to 2mW and doubles again to 4mW when walking.

Vullers explained that one of the main challenges in creating the product was ensuring that the thermoelectric generator did not draw too much heat from the body and leave the wearer feeling cold.

The device has been designed, fabricated and integrated into an office-style shirt that can be worn without being easily identifiable.