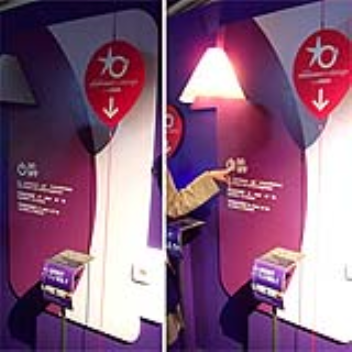 While the lack of technical details makes this idea seem like nothing more than an impractical concept, from what I can tell it does exist and it does work, and will supposedly be available starting sometime in February of this year. Created by Nicolas Triboulot, Laurent Grapin and Thibault Thomas of Quark Design, the ON/OFF paint can be applied to any surface like regular household paint, but when used in conjunction with a special "electronic mechanism" that entire painted surface then becomes a touch-sensitive light switch.

So instead of fumbling around at night in the dark hunting for a small switch on the wall, the entire wall can serve as the switch. Or, you can limit it to being just a thin painted strip that runs around the entire perimeter of a room. The point here is that the idea is infinitely flexible, not to mention the fact that it frees you from having to route electrical wires everywhere. Now the aforementioned "electronic mechanism" which seems to make it all possible does have to be hidden somewhere, so it's not a perfect alternative, but the pros do seem to make the idea very tempting.