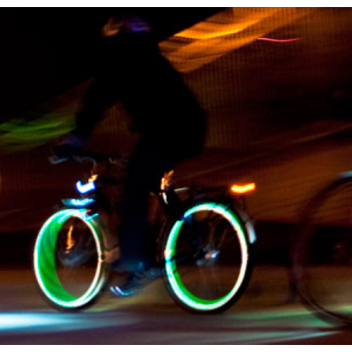 When riding at night, nothing is more important than visibility and recognition. Most cyclists have front and rear lighting, but their side visibility is often covered by passive reflectors that only work in direct light.  And even the front and rear lights can get lost in the environment – allowing a cyclist to go unnoticed in many circumstances.

Enter Lunasee. The patented “active side lighting” system creates a visible and unmistakable light signature with constant illumination that substantially improves the ability of motorists to not only see you, but to recognize you as a cyclist.  In combination with front and rear lighting, Lunasee active side lighting makes you visible and identifiable from almost every angle.

Even better, Lunasee integrates seamlessly into the bike.  The system consists of a special film integrated into the rims and four small LEDs.  Lunasee is nearly invisible in the day, but highly visible at night.  Simple. Integrated. Effective.