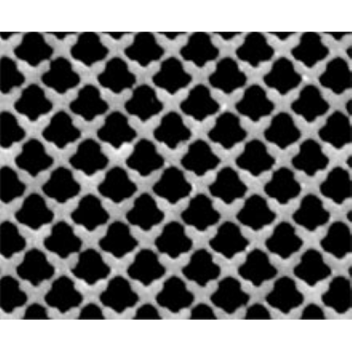 A new nanostructured material that absorbs a broad spectrum of light from any angle could lead to the most efficient thin-film solar cells ever.

Researchers are applying the design to semiconductor materials to make solar cells that they hope will save money on materials costs while still offering high power-conversion efficiency. Initial tests with silicon suggest that this kind of patterning can lead to a fivefold enhancement in absorbance.

Some researchers are turning to exotic optical effects that emerge at the nanoscale to solve this conundrum. Harry Atwater, a professor of applied physics and materials science at Caltech and a pioneer of the field, has now come up with a way of patterning materials at the nanoscale that turns them into solar super-absorbers.

Atwater worked with Koray Aydin, now an assistant professor of electrical engineering and computer science at Northwestern University, to develop the super-absorber design, which takes advantage of a phenomenon called optical resonance. Just as a radio antenna will resonate with and absorb certain radio waves, nanostructured optical antennas can resonate with and absorb visible and infrared light. The length of a structure determines what wavelength of light it will resonate with. So Atwater and Aydin designed structures that effectively have many different lengths: wedge shapes with pointy tips and wide bases. The thin, nanoscale wedges strongly absorb blue light at the tip and red light at the base.

Atwater and Aydin demonstrated this broadband effect in a 260-nanometer-thick film made of a layer of silver topped with a thin layer of silicon dioxide and finished with another thin layer of silver carved with arrays of wedges that are 40 nanometers at their tips. Atwater says they chose these materials because they are particularly challenging: in their unpatterned state, they're both highly reflective; but the patterned films can absorb an average of 70 percent of the light across the entire visible spectrum.