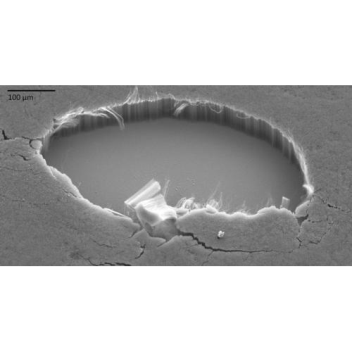 The team of engineers at NASA's Goddard Space Flight Center in Greenbelt, Md., reported their findings recently at the SPIE Optics and Photonics conference, the largest interdisciplinary technical meeting in this discipline. The team has since reconfirmed the material's absorption capabilities in additional testing, said John Hagopian, who is leading the effort involving 10 Goddard technologists.

"The reflectance tests showed that our team had extended by 50 times the range of the material’s absorption capabilities. Though other researchers are reporting near-perfect absorption levels mainly in the ultraviolet and visible, our material is darn near perfect across multiple wavelength bands, from the ultraviolet to the far infrared," Hagopian said. "No one else has achieved this milestone yet."

The nanotech-based coating is a thin layer of multi-walled carbon nanotubes, tiny hollow tubes made of pure carbon about 10,000 times thinner than a strand of human hair. They are positioned vertically on various substrate materials much like a shag rug. The team has grown the nanotubes on silicon, silicon nitride, titanium, and stainless steel, materials commonly used in space-based scientific instruments. (To grow carbon nanotubes, Goddard technologist Stephanie Getty applies a catalyst layer of iron to an underlayer on silicon, titanium, and other materials. She then heats the material in an oven to about 1,382 degrees Fahrenheit. While heating, the material is bathed in carbon-containing feedstock gas.)