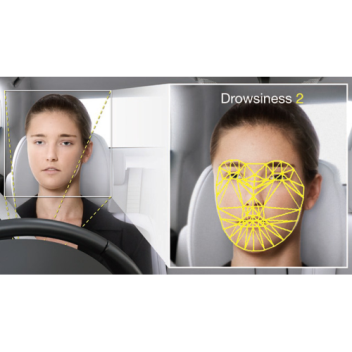 Improving on existing systems that only watch a driver's eyes for signs of fatigue, Denso has created a drowsiness level checker that tracks subtle muscle movements over their entire face. Alerting them that they're too tired before they fall asleep.

A camera installed on the steering column is pointed at the driver's face, while the live video feed is monitored by the system's custom software. Seventeen distinct points on the driver's face are monitored the entire time they're behind the wheel, allowing the system to monitor the movement and level of activity of their facial muscles.

While constant blinking is a sure sign that someone's drifting off, the expression on their face is a more subtle indicator of their drowsiness level. So by monitoring more than just the eyes, the system can provide an indication of the driver's fatigue level on a scale of one to six, and can let them know when they need to pull over before they actually fall asleep at the wheel.