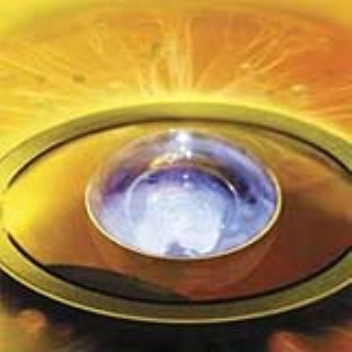 This tiny new liquid lens can adjust its focal length to virtually any number. The adaptive liquid microlens, developed by researchers at the University of Wisconsin, Madison, could lead to cheap and easy-to-make sensors, "lab-on-chip" devices used for testing biological and chemical substances in a fluid, and even "camera pills" that photograph the intestines after being swallowed. Environmental stimuli (shown as yellow rays and tiny spheres) trigger a hydrogel (shown as a yellow ring edged in black) to swell or contract. As a result, water below the lens (center) either bulges or bows. The novel technique relies on a millimeter-sized ring made of a polymer-and water-based "hydrogel." The gel can respond to a variety of stimuli including temperature, light, chemicals, bacteria, acids and bases, and electrical fields.The ring's response to whatever it detects is to either contract or expand.