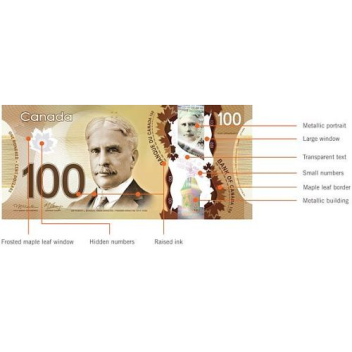 Canada's battle against paper money dates back to 1987 with the introduction of the $1 "Loonie" coin. Now, the Canadian government is doing the same to larger denominations—replacing conventional cash with counterfeit-proof polymer bills.

The new bills are constructed from a polymer blend that reportedly lasts more than twice as long as cotton-paper currency, as well as be melt- and freeze-proof. These are handy when subjected to harsh Canadian winters as well as washer/drier combos. The texture of these notes are also reportedly quite different than that of traditional money. The new bills include a number of security features such as raised print, metallic ink portraits, transparent and hidden text—even a see-through "window" in the bill.