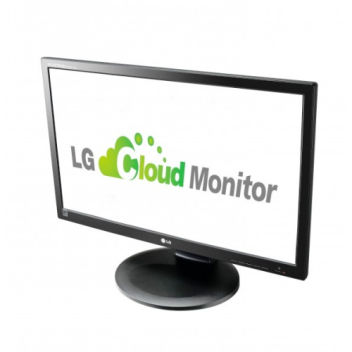 Just days after launching its own cloud storage service, LG has announced the "P Series," a new line of cloud monitors aimed at company networks. Besides the monitor itself, its "zero client" work stations need only a LAN cable (which doubles as power supply), a keyboard and a mouse to work properly, cutting down dramatically on costs and allowing companies to ditch desktop and laptop computers altogether.

The monitors use the PC-over-IP protocol, a centralized, server-based model in which the host takes care of nearly all the number-crunching – it fetches the data, renders the graphics, compresses and encrypts the rendered images pixel by pixel, and then sends them over to the client machine using the low-latency UDP protocol, the same as is used for VoIP chat.

On the receiving end, the clients' only job is to decode the image and display it, eliminating the need for a CPU, memory or storage of their own. This simpler hardware setup translates into lower maintenance costs, no incompatibility issues between host and client, and a longer life cycle for the monitor. The client machines don't need to install operating systems or software updates, which are managed centrally along with the data, resulting in increased network security.

The system also adopts the Universal Power over Ethernet (UPoE) technology developed by Cisco, which feeds up to 60W of electric power via the LAN data cable. This is plenty for the monitors, which can consume as little as 15W. Virtualization via VMware enables a single server to support a large number of monitors, and lets administrators perform system updates without causing interruptions.