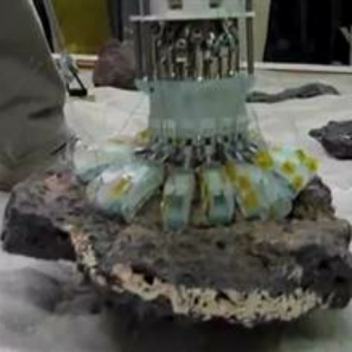 Robotic anchor will get a grip on space rocks

To recover the riches embedded in asteroids, as the recently launched Planetary Ventures aims to do, miners will first need to latch their drills onto the surface of the space rocks. NASA scientists are at work on a robotic gripper that appears up to the task.

The gripper takes advantage of microspine technology pioneered by Aaron Parness, a member of the robotic vehicles and manipulator team at the Jet Propulsion Laboratory in California. The spines look like high-tech fish hooks and are able to easily attach and detach from just about any surface.

The first gripper shown off in the video below has a hierarchical configuration of microspines, with 16 independent carriages, each with 12 spines. When the contraption is engaged on a rock, the spines grip the surface, establishing an anchor strong enough to lift the 29-pound rock off the ground.

A second gripper uses the same concept, but employs steel extension springs that are better suited to the frigid temperatures of space.

The idea is to then use this gripper to latch onto an asteroid and send a drill bit through the middle of it to core out samples. You can see NASA using such a setup for asteroid sampling missions in the future. A scaled-up version could be something private sector space miners would want to license.

"We have certainly discussed the asteroid mining potential within my research team," Parness told me in an email Thursday. "It's not our short term priority, but it is a possibility down the road, either for extracting rock with the drill or for creating an anchor strong enough to tow a small asteroid somewhere more desirable for processing."

He hasn't been in direct contact with Planetary Resources, the space mining venture announced in April.

Going forward, the team plans to outfit the grippers on a footed robot called Lemur IIB. You can imagine this robot scaling walls and scurrying across asteroids or around lava tubes on Mars in search of minerals to collect.