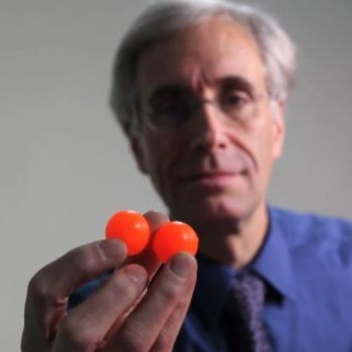 New silicone is both viscous and elastic

Vistik is a viscoelastic material, meaning that it exhibits both viscous and elastic properties. As a result, when compared to something such as conventional silicone rubber, there’s a considerable time lag in its response to continuous pressure.

It seems elastic in response to sudden forces or impacts, denting in proportion to the sudden, brief stress and then returning almost instantly to its earlier shape when that stress is removed. But if you push on it for a long time (most of a second or more), it relaxes. It adapts to its new shape and begins to like it (temporarily). When you release the stress after the Vistik has adapted, it's slow to go back to its earlier shape. In fact, if you try to pull it back suddenly to that earlier shape, it will fight.”

The material is chemically inert, tolerates a wide range of temperatures, plus its malleability and elasticity can be adjusted by tweaking its formulation. It can become soft enough to take on the texture of a user’s fingerprint ridges, while remaining sufficiently elastic to bounce like a rubber ball.