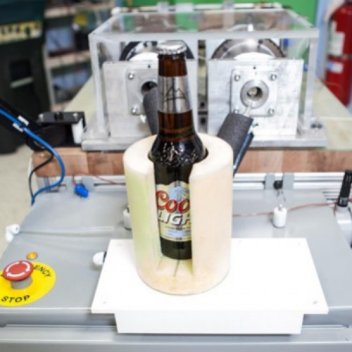 General Electric believes it has discovered a new method of magnet-based refrigeration that is 20-30% more efficient than existing refrigeration technology, which almost universally uses a liquid refrigerant and compressor.

At the heart of GE’s new refrigeration technology is the magnetocaloric effect.  The magnetocaloric effect, like vapor-compression refrigeration (the method used in all modern cars, fridges, etc.) was discovered a very long time ago, but there have always been large barriers preventing its commercial adoption. Basically, some metals get warmer when exposed to a magnetic field, and then cool down again when the magnet is removed. By doing this repeatedly, you can create a heat pump that moves thermal energy from one place and deposits it elsewhere. (This is exactly what your AC unit does, incidentally.)

For a variety of reasons, though, it has never been possible to build a commercial magnetocaloric refrigeration unit. For a long time, researchers could only make it work with superconducting magnets that had to be cooled to very low temperatures — which made it useful as part of a larger, cryogenic cooling system, but useless for room-temperature situations. In recent years, the development of better magnetocaloric materials and strong room-temperature magnets has allowed the technology to inch slowly forward. To put this in perspective, the GE researchers say they’ve been working on magnetocaloric refrigeration for 10 years, and it took them five years to create a “huge machine” capable of reducing the temperature by around 1 degree Celsius (2 degrees Fahrenheit). Now, they’ve created a desk-sized device that’s capable of cooling by around 44C (80F) — more than enough to power freezers, fridges, and air conditioning units.