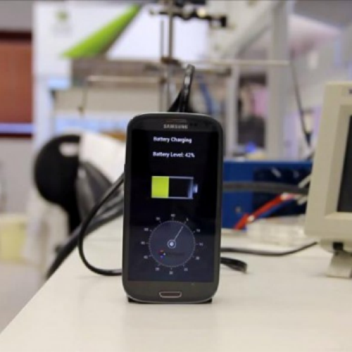 Bio-Organic Battery That Recharges In 30 Seconds

As we all know only too well, recharging our portable electronics can take a painfully long time. This is because reversing the chemical reactions that caused the battery to deplete is a process that can hardly be rushed, for considerations of both safety and energy efficiency.

But now, a radically new battery design advanced by StoreDot could bring charge times down to the order of a few seconds. The company produces so-called nanodots, chemically synthesized bio-organic peptide molecules that, thanks to their small size, improve electrode capacitance and electrolyte performance. The end result is batteries that can be fully charged in seconds rather than hours.

'In essence, we have developed a new generation of electrodes with new materials – we call it MFE – Multi Function Electrode," StoreDot CEO Doron Myersdorf told Gizmag. "On one side it acts like a supercapacitor (with very fast charging), and on the other is like a lithium electrode (with slow discharge). The electrolyte is modified with our nanodots in order to make the multifunction electrode more effective."

The company says that unlike other nanodot and quantum-dot technologies that are heavy metal based, making them toxic, its nanodots are made from a vast range of bio-organic raw materials that are environmentally-friendly. These materials are also naturally abundant, and the nanodots employ a basic biological mechanism of self-assembly, making them cheap to manufacture.

Self-discharge characteristics are similar to those of lithium-ion cells and, for its first prototype, the company targeted the approximate capacity of a smartphone battery (around 2,000 mAh).

But Myersdorf told us that the technology could also be adapted to electric cars, by modifying the electrode so it could sustain higher currents (and, of course, configuring a large number of cells in parallel).