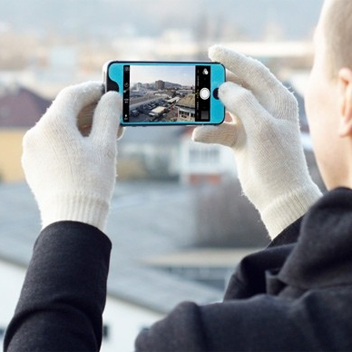 Smartphone Cover Allows Use Of Gloves

Anyone who has ever tried using their smartphone while wearing gloves will know it's nigh-on impossible. You therefore have a number of choices: wear fingerless gloves or special touchscreen-friendly gloves, remove your gloves while using the phone, or desist from using your phone entirely when out in the cold. Or thanks to a new product called Glovys, you could fix the problem using technology.

Glovys is a removable device that enables you to use your smartphone while wearing gloves. It bridges the gap between the glass and your gloved finger, allowing the capacitive touchscreen to sense changes in pressure.

It comprises two sheets of film with transparent circuits on them, separated by a small gap. When you press on the top sheet, the two circuits touch together, creating an electrical discharge which activates the screen. Glovys does all of this without using any batteries and without needing to be calibrated in any way.

Glovys started life as a touchscreen designed to be used underwater, but during testing it was discovered that it also worked well with gloves. The design is now patented, with its creators hoping to continue to improve the product through further development.

It's available for most iPhones, from the iPhone 3 up to the iPhone 6 Plus. However, its lead designer Oskar Marko MusiÄ‡ is keen to produce further versions of Glovys for other devices, including different phones, tablets, and wearables.