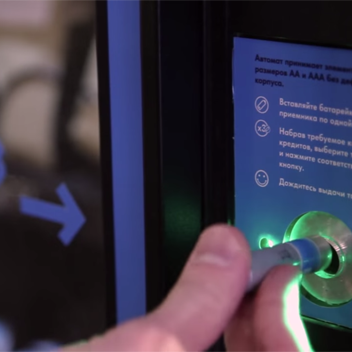 Volkswagen and DDB Russia created a new kind of eco-currency for the car company’s campaign. To make it easier for locals to recycle, they installed a specially-made vending machine in different parts of Russia that only accepts batteries as payment.

Think Blue embodies Volkswagen’s commitment to creating a whole new standard of technologically progressive, environmentally friendly products in order to shape a more sustainable future. The aim of this latest initiative was to encourage consumers to recycle their old batteries. VW made it easier to do so and also offered a number of items as incentives.

Battery recycling is a problem in Russia, where over 15 million batteries and accumulators are thrown away every year in big cities like Moscow. One battery can pollute more than 20 square meters of the ground and many young people aren’t concerned about the problem, so Volkswagen and DDB Russia tried to motivate them.

The Think Machine is a vending machine that accept batteries as payment instead of banknotes and coins. It was installed in popular locations around Moscow such as Flacon, the biggest design center in the city. The machine enabled passersby to buy items from local community shops by parting with their old batteries. Two batteries would get them an anti-stress ball, four batteries would buy them a bottle of water, and for six batteries they could purchase an eco t-shirt.

One single machine collected over 8,000 batteries during the first month it was installed. In comparison, a regular collection point in Russia usually gathers less than a thousand in a month. The Think Machine successfully encouraged more people to recycle their batteries and also gave them a little something in return.