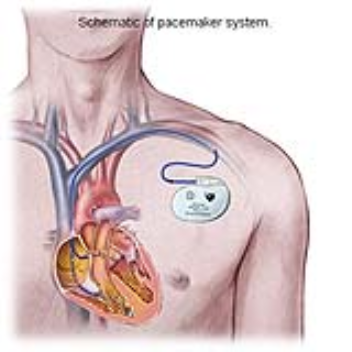 Theself-powering pacemaker would keep the heart beating by using theperson's own heartbeat to power it. An imbedded generator could continously produce power in severalways, such as through electromagnetic induction or the piezoelectriceffect (electric energy generated via mechanical stress).

The generator itself consists of a magnet, aconductor (both micro- or even nano-sized), and electrical leads hookedup to the medical device. Contraction of the heart muscle causesrelative motion between the magnet and the conductor (such as a coil ofwire). This relative motion between the magnetic and coil induces anelectric current in the wire, which is transmitted through the leads tothe implanted pacemaker.