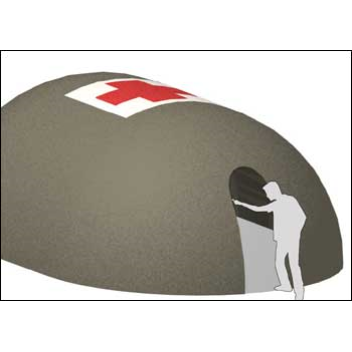 make it easier to assemble

building in a bag

In a world with millions of refugees, numerous war zones and huge areas devastated by natural disaster, aid agencies and militaries have long needed a way to quickly erect shelters on demand.

Soon, there will be such a method. A pair of engineers in London have come up with a "building in a bag" -- a sack of cement-impregnated fabric. To erect the structure, all you have to do is add water to the bag and inflate it with air. Twelve hours later the Nissen-shaped shelter is dried out and ready for use.

The structure is intended to improve upon two current methods of providing emergency shelter: tents, which provide only poor protection, or prefabricated, portable buildings that are expensive and difficult to transport. Dubbed the Concrete Canvas, the shelter incorporates the best aspects of both forms. It is almost as easy to transport as a tent, but is as durable and secure as a portable building.

The inventors are engineers pursuing a master's degree in industrial design engineering at the Royal College of Art in London. William Crawford and Peter Brewin came up with the idea when they were thinking of an entry for the annual British Cement Association competition for new and innovative uses of concrete.