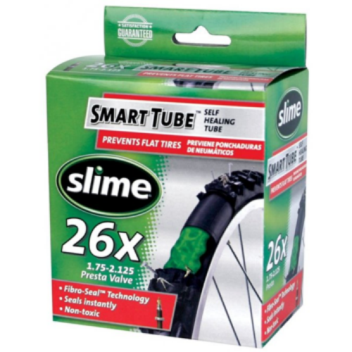 If you're a mountain biker, then you are no doubt aware of the increasing popularity of tubeless tires. For the uninitiated, these are tires that have no inner tubes, but that are instead partially filled with any one of various brands of slimy polymer goo. When the tire is punctured, some of the goo seeps out through the hole, and firms up upon contact with the air. They're self-sealing tires, essentially. Because they don't incorporate tubes, they also weigh somewhat less than a traditional tire/tube combo. On the downside, though, some brands are notoriously messy to install, and to keep airtight. They also don't work with all types of rims. Well, if you like the self-sealing idea, but not the possible hassle of tubeless tires, there's a product you might want to try: SLiME Smart Tubes - slime-filled inner tubes.

SLiME is one of the gooey products sold for use in tubeless tires, both bicycle and automotive. It consists of a non-toxic latex-based liquid carrier, which contains fibers and rubber particles that do the actual hole-plugging. With their Smart Tubes, they've simply pumped a modified version of the stuff into inner tubes, which you then install just like a regular tube. According to the company website, "Smart Tubes instantly seek out and seal punctures as they occur, preventing flats, repeatedly and continuously for up to two years." They're available in a variety of sizes for both mountain and road bikes, with either schrader or presta valves. They also come in lightweight, regular and Super Thick versions.