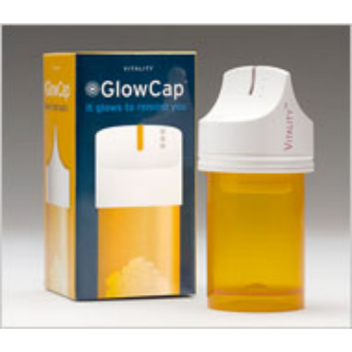 The GlowCap is a screw-on cap for a standard prescription medicine bottle, but it has a sensor and transmitter embedded. Using your computer, you program when the pills need to be taken, then at the appointed time, a light on the cap flashes. After a half-hour, a three-tone alert sounds, then a five-tone alert. If the bottle still has not been opened, the system makes an automated reminder phone call to the patient or a caregiver.

The GlowCap system compiles adherence data which anyone can be authorized to track. That way the doctor can make sure Gramps stays on his meds.

Yes, you can trick it by opening the bottle and not taking the pill, but the GlowCap is aimed at the forgetful, not the malfeasant.