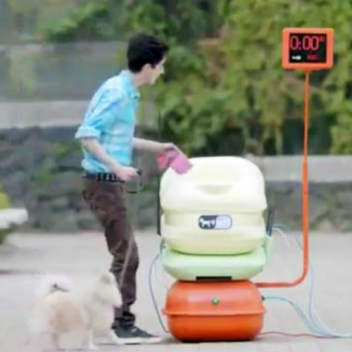 Putting up signs that politely ask dog owners to clean up their pet’s excrement is often ineffective, judging by the amount of poop that litters certain dog-heavy areas. Instead of threatening to slap a fine on people, maybe it makes more sense to use positive reinforcement.

DDB Mexico recently put on a campaign for Terra, a Mexican Internet company, that gives dog owners the opportunity to trade in their bags of poop for free Wi-Fi. The more poop people throw in the receptacle (measured in weight), the longer the free Wi-Fi lasts for the park and nearby area. According to this video, there are people all over Mexico City’s parks using their tablets and laptops, just waiting for a free Wi-Fi connection to pop up. They will all be incredibly grateful when dog owners throw away their pet’s poop (or other heavy objects).

The Terra campaign is launching in 10 parks in Mexico City, which is turning into a veritable goldmine for people with excess trash--trade in your dog poop for Wi-Fi, and trade in your recyclable garbage for credits at local farms. It almost makes you want to have trash to throw away.