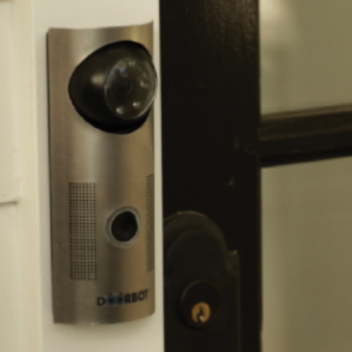 DoorBot lets you see who's at the door, wherever you are

Everyone wants to feel safe in their home, and it's easier to do so when you know who’s standing outside. DoorBot aims to help with exactly this, by functioning as a Wi-Fi-connected doorbell that streams live video and audio directly to your smartphone of choice whether you’re sitting on your couch or backpacking abroad.

DoorBot is constructed from high density polymer with a brushed aluminum faceplate, and features an infrared camera for video capture during the day and night. The unit is weatherproof and can be secured with an included mounting bracket and four screws. Power is provided by four AA batteries which are said to be good for up to a year’s use.

Once a visitor approaches your door and presses the LED-lit push-to-talk button, video and audio is streamed over the local Wi-Fi connection to your iOS or Android device like a normal video intercom system. We hope this uses a robust security framework to prevent hackers gaining access to your DoorBot, though we're yet to receive confirmation on this point.

In addition, DoorBot is also compatible with the Lockitron smartphone-based keyless entry system and once combined with this device, will allow the user to unlock or lock the door at will, increasing its usefulness markedly.