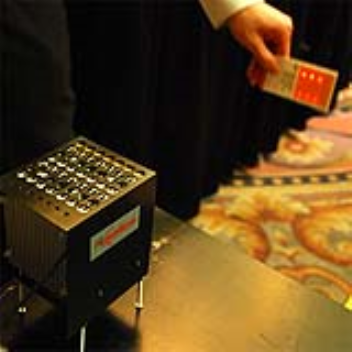 At CES this year, we saw several different stabs at wireless power. Most of them involved either direct contact, or minuscule amounts of electricity. At ETech last week, we saw a demo from a company called PowerBeam, which has a wireless power solution that promises to tackle both of those shortcomings.

The pay PowerBeam works is exactly like it sounds: with a beam of power. And beam of power = laser. Infrared (invisible) lasers, in this case. Pretty high powered lasers, too, with between 1 and 5 watts continuous output. The PowerBeam lasers are spread out a bit so that their power densities top out at around 10mW/mm2, but it's all heat energy, so if you put your hand in front of the beam, it feels kind of like putting your hand over a hot cup of coffee.